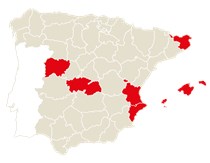 Bread and sweets are a significant pair in the Spanish diet. Every good meal includes bread and a dessert to finish it off. Bread has been eaten on a daily basis in Spanish homes for thousands of years. Iberian Celts introduced bread to Spain in the 3rd century B.C. long before roman domination. For the Mozarabs (Christians living in Islamic Andalucía) it was a basic element of their daily diet. Each citizen kneaded their own bread and took it to public bakeries, after placing their own mark on it to avoid any possible confusion.

The first laws regulating bread making in Spain date back to the 14th century, and there are documents proving that the bakers’ guild in Barcelona existed since the year 1200. Elsewhere in the country, especially in the Mediterranean area, the bakers’ guilds have been in existence for over 750 years.

Such a long history of bread making has led to a great variety of shapes, textures and ingredients. In Spain there are currently 315 varieties, many of which with local character. Although the most popular is known as la barra, the bar (or the pistol in Madrid), other local varieties that are in high demand are the Catalan pa de pagés, the Galician hogaza loaf, candeal bread etc.

Bread holds a significant place in our cuisine. The bocadillo is the Spanish version of the British sandwich and between its halves, delicious feasts can be enjoyed such as Spanish tortilla, battered squid rings, meat, ham, etc. Pulgas (tiny loaves), tostas (toasted slices with all sorts of toppings) or pa am tomaquet, (Catalan bread soaked in tomato and olive oil) are some of Spain’s classic tapas. Bread is also an essential ingredient of dishes like gazpacho, garlic soup or migas, a sheperd’s dish made with fried bread crumbs and meat.

To a Spaniard a sweet is a concentrated piece of happiness. It should therefore come as no surprise that the Spanish sweet industry is the 5th confectionery and the 1st sweet and chewing gum manufacturer in Europe. In 2012, 851.954 T of sweets were eaten in Spain for an overall revenue of nearly euros 3,300 Mill. But the quality and range of our confectionery transcends our borders. 32% of production is destined to foreign markets, primarily the EU (73%), although exports to other countries have been growing in the past years (27% in 2012).

Pastry, cakes and confectionery manufacturing methods vary significantly and always guarantee the utmost quality and the use of the finest ingredients. In 2012 the Spanish bakery and confectionary sector produced 167,108 T, experiencing a powerful growth in its exports (8.603 T). The Spanish market grossed euros 758 Mill. in 2012.

Spanish sweet industry is the 5th confectionery and the 1st sweet and chewing gum manufacturer in Europe. 32% of its production is destined to foreign markets

History of sweets is closely linked to sugar’s history. In 1747 a German scientist discovered the sweetening properties of sugar beet. But it was not after World War II, that the industry developed new formats, textures and flavors. The Spanish sweet and chewing-gum industry ranks 1st in the EU, reaching a volume of 109,533 T in 2012 inside Spain and exporting 121,016 T One must underline the sector’s efforts to deliver sugar-free products and products with no added sugar to the consumer.

Some of the most typical sweets are turrones (nougats) and marzipans, without which Christmas in Spain would be unthinkable. There are countless varieties: hard nougat, soft nougat, chocolate flavored nougat, guirlache (brittle nougat) etc. Its origins, as with marzipan, date back to Arab colonization. Spain is the 1st worldwide manufacturer of Christmas sweets – 31,400 T worth euros 272 Mill. –, which are exported to Latin America and the Far East. Although the process has become automated, its manufacture is still traditional.

As far as chocolate and cocoa are concerned, one must not forget that it was the Spaniards who brought it from the Americas around the year 1520. However it is not until the beginning of the 19th century that it started being manufactured in bar form. In the twentieth century new formats came onto the market such as soluble cocoa, spreads and chocolate bars.

Honey is also deeply rooted in Spain, the first honey producer in the EU and the 12th worldwide, producing 33,571 T in 2012. In 2012 over 19,661 T were exported. Spain is also the European country with the greatest number of apiaries, or beekeeping farms, (24,230), beekeepers and hives (2.5 Mill.). But apart from its economic value, this sector is particularly significant for the environment, since bees play a key role in pollination and thus in the conservation of the diversity of wild flora.

The Spanish breed of bees Apis mellifera iberica is the main producer, although other breeds have been introduced to prevent inbreeding and genetic weakening. The variety of climates and ecosystems of the country allows the production of a great variety of honeys, especially Mediterranean flora, such as thyme, rosemary, lavender, holm oak and orange blossom, although 46% of manufactured honey is milflores, made from numerous different flowers.