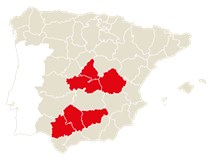 Olive farming began over 5000 years ago in the Middle East. The Phoenicians and Greeks introduced it to the Iberian Peninsula, but it was the Romans who extended its farming and improved oil production techniques. Not only was Hispania the primary oil producer of the empire,but its oils were also considered the highest quality.

It was used to oil athletes and kings, as a beauty and hygiene product, for burning in lamps and temples or as lubricant for agricultural tools. The Arabs perfected the oil extraction technique. Indeed the Spanish word for oil, aceite, comes from the Arab al-zait meaning olive juice. Centuries later it was the Spaniards who, during the 16th and 17th centuries, brought olive trees to America, extending its farming throughout many regions of the continent.

The olive tree, a typically Mediterranean tree, requires a lot of sunlight, mild winters, warm, dry summers and rain during the rest of seasons. Its growth is very slow and it does not yield fruit until at least 5-10 years since its plantation. It reaches maturity at 20 and attains its splendor between 35 and 100-150 years of age. It can live up to hundreds of years but the quality and quantity of its olives decreases dramatically.

Spain, with 300 Mill. olive trees, is the first producer and exporter of olive oil in the world

The variety of flavors and aromas of the olive oil is due to the diversity of climates and microclimates in our country Olive oil Olive oil Spain’s food manufacturers: A prestige book 32 and to the diversity and richness of our soil, something which does not occur in any other producing country. To this we need to add the over 260 varieties of olives in Spain, among which the Picual – which accounts for 50% of olive farming in Spain - Cornicabra, Hojiblanca, Arbequina, Lechín de Sevilla, Verdial, Empeltre and Picudo varieties stand out.

The result of such a variety of olive trees, climates, altitudes and soils is an extremely diverse range of olive oils with different sensory characteristics. Thus we can find smooth and sweet oils, oils with strong character and body and even bitter or spicy oils. But the quality they all share is their fruity and intense fragrance.

Olive harvesting – towards the end of autumn and the beginning of winter –, can be performed manually, hitting the tree with long rods, or using machinery which shakes the tree to release its fruit. Once collected, the olives are taken to the mill or oil press for processing during the 24 hours following their harvest. Only this way can maximum quality oil be obtained. Once the olives have been cleaned of twigs and washed they are pressed into a paste.

In the traditional oil extraction process, the paste is placed in baskets that are then pressed to obtain an oily juice, composed of oil and water. Once decanted the oil and water separate naturally due to their difference in density. Another method is the continuous system or centrifuge separation.

One liter of water is added to each Kg of paste and a horizontal centrifuge separates the oily juice from the solid matter. The juice is then placed inside a vertical centrifuge that separates the oil from the water. It is fundamental that during the process the temperature does not exceed 35oC. Between 4 and 5 Kg of olives are necessary to make 1 liter of olive oil.

The olive oil is then stored in tanks made of inert materials such as stainless steel or glass tiles until its sale. In order to let the oil mature and prevent oxidization it is kept between 15o and 18oC, avoiding any exposure to light. Unlike the extraction of other vegetable seed oils, which requires solvents for their manufacture, the production process of virgin olive oil is completely mechanical.

Currently Spain is the number 1 oil producer in the world. The famed area (over 300 Mill. olive trees across an area larger than 2 Mill. hectares) accounts for 25% of all the olive farming surface worldwide. Its average annual production is 1.1 Mill. T, reaching 1.6 Mill. T during recent campaigns. By region, the production is shared between Andalusia (80%), Castile-La Mancha (7%), Extremadura (5%), Catalonia (3,5%) and the rest of Spain (4,5%).

Furthermore Spain is the number 1 exporter worldwide, reaching 128 countries across 5 continents. In the past 10 years we have exported a yearly average of 460.000 T, reaching as much as 875.500 T. in some campaigns. This is due to our oils’ outstanding quality, subject to the strictest controls both on behalf of the producers themselves as of the competent authorities. There are currently 9 extra virgin olive oil Protected Designations of Origin: Baena, Sierra de Segura, Sierra Mágica, Priego de Córdoba, Sierra de Cazorla, Les Garrigues, Siurana, Montes de Toledo, Bajo Aragón and many others in the process of being recognized.