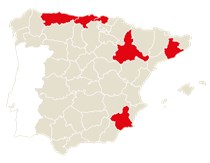 Spain has always harvested the sea, both for domestic consumption and for trade. Tartessians and Phoenicians already fished sardines, anchovies and red tuna in the Bay of Cadiz. Greeks and Romans were taken aback by the large amount of fish and seafood that could be obtained from its coasts. The strong demand for sea products from Hispania under Emperor Augustus’ rule filled Spain with dry salting factories to supply Rome.

Documents from the 12th century show that through the fishing method known as almadrabas over 140,000 tunas were captured in a single trip. This method, invented by the Arabs and still in use today, consists in surrounding the tunas with nets that are progressively hauled in bringing the tunas to the surface where they can be harpooned by hand.

Today Spain is one of the world’s major fish consumers, averaging 26.8 Kg (50 lb) per capita annually. Since national production is insufficient to supply the large local demand (46 Mill. inhabitants plus 55 Mill. tourists), Spain’s state of the art freezer boats have moved to international fishing waters, mainly in the N. and S. Atlantic and in the Indian Ocean. However, artisanal fishing still takes place in the seashores of Spain. Presently the Spanish fleet is the number one in the world in terms of catches. Its 18,000 boats catch 13 Mill. T of fish annually.

Spain can be divided into 4 distinctive fishing zones: the Mediterranean arch, the north (Galicia-Cantabrian Sea), Andalucia (Gulf of Cadiz) and the Canary Islands, each one specialized in the capture of a different type of fish or in the harvesting of shellfish. Galicia holds 45% of all catches, and its evolving industry holds the highest weight in catches in the sector. Its star products are octopus and shellfish. The north fleet has specialized in coastal catches such as sardine, hake and shellfish, but also goes to the Atlantic fishing waters to catch tuna, swordfish and cod. The Mediterranean arch accounts for almost half of the Spanish fleet, while Andalucía’s fleet is an artisanal and coastal one. The Canary Islands fishing industry operates in the southeast Atlantic.

Traditionally, every Friday, fish is served in most Spanish homes and restaurants, an age-long reminiscence of Lent. Of all oily fish, sardines, anchovies and horse mackerel are the most consumed ones, followed by tuna, albacore, mackerel, swordfish and halibut. Cod, which comes from cold seas and is preserved in dry salt, is also an important component of classical dishes. Anchovies (a classical ingredient of Caesar salads and pizzas, for instance) are consumed in Spain in tapas or on a toast.

Summer is sardine season and the best time to eat them, since their meat is juicier. Grilled, fried, barbequed, pickled or stewed, sardines are cooked in a wide array of ways. Tuna has been part of the Spanish diet for over 25 centuries.

Tuna family preserves – red tuna, albacore and bullet tuna – have become some of the main fares in Spanish households because of their versatility in the kitchen. A visit to fishmongers in Spain is a great lesson on marine zoology due of the impressive array of fish and shellfish on display. Some of them – swordfish, shark or scorpion fish – might even surprise the unaccustomed eye.

The reputation of Spanish shellfish was already legendary in Rome, which imported dried octopus to satisfy the cravings of the higher classes. A true delicacy, it is a must in all kinds of celebrations, reaching astronomical prices. Seafood can be subdivided into 3 major groups: cephalopods, mollusks and crustaceans.

Cephalopods – calamari, cuttlefish, baby squid, jumbo squid, etc. – are highly popular because they taste exquisite and are easy to eat, since they lack scales or bones. Mollusks such as mussels, clams, black scallops or cockles have become a staple of Spanish cuisine. Since most of them are found buried under the sand, on low tide shellfish collectors – their backs bent over for hours on end – dig the sand looking for these precious sea truffles.

But crustaceans are the true stars. No major feast or celebration would be complete without lobsters, spiny lobsters, crayfish, shrimp or prawns. Roasted, baked, baked in cooking salt, deep fried, grilled, smoked, marinated or preserved, fish and shellfish have been an excuse for Spaniards to show off their creative cuisine.

However, the sea’s delicate balance has led to a considerable increase of fish farming. One fourth of Europe’s fish farming production comes from Spain. Nearly 50,000 T of fish are harvested annually in its farms, and it is the 2nd largest supplier of gilt head bream and sea bass, although many other fish are also produced in these farms.

Spaniards consider preserves a culinary delight consuming yearly 4 Kg (9 lb) per person. While the Spanish fish preserve industry has incorporated traditional methods to its industrial processes – olive oil or pickling brine – technical developments enable it to can its products in brine, water, tomato or even cooked. While the tuna fish family preserves account for 68.5% of all its products, anchovies are a world apart, since they require a very elaborate, hand crafted process of preparation that goes back to the 19th century.

R&D is also playing an interesting role in the Spanish fishing industry. New technologies have enabled the creation of new fish products, such as caviar substitutes or surimi crab fingers. Seaweed is not an oddity anymore, and cold Galician shores have become the perfect location for growing and exploiting them commercially. In the end what matters is quality and taste, and in that sense Spanish sea products captivate anyone who tries them.