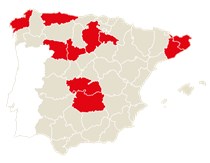 The wine sector is extremely relevant in Spain, not only because of its economic, social, and environmental importance, but also because of the excellent international image it projects. Spain is the 3rd wine producer worldwide, and the second in terms of vinegrowing, land and export volume.

The Phoenicians were the first to plant vines in Spain 3,000 years ago in the region of Jerez (Andalusia). During the Christian era, Spanish wines were appreciated all throughout the Mediterranean and the North of Africa. The Spaniards brought vineyards to the Americas in the 16th century and when, in the 19th century, the phylloxera plague devastated Europe’s vines, many French wine growers moved to Spain bringing their varieties of grapes along with them and thus driving the Spanish sector.

The Spanish Civil War (1936-39) and the Second World War caused the decline of the sector, which did not fully recover until the last quarter of the 20th century. Since then the sophistication and modernization of production methods have increased the quality of Spanish wines so considerably that they are now amongst the best in the world, as the numerous international awards testify.

Spanish wines are the fruit of a terrain and climate with very special qualities. The amount of sunshine to which the vines are exposed (2,000-3,000 hours a year), the long warm summers, the mild winters with the adequate rainfall and the great variety in terrain, favor the wine harvest and guarantee excellent quality grapes.

Depending on their location and the degree of protection (the legislation and controls they must comply with), they are divided into: Table Wines (not subject to any requirement); Vinos de la Tierra (from a specific region) and Vinos de Calidad con Indicación Geográfica (V.C.) which come from a specific regions, are made with local grapes and aged locally. Spain has 69 Designations of Origin (D.O.), such as Ribera del Duero, Penedés, Albariño, La Mancha or Toro. Their regulations are very strict. There are currently only 2 Qualified Designations of Origin (D.O.Ca.): Rioja and Priorat. Their regulations are even tougher and their quality control stricter. Finally come the Vinos de Pago (V.P.), with unique qualities that set them apart from all other wines.

Spain is also well known for its magnificent cavas – sparkling wines made using the méthode champenoise – and for its fortified wines, whose proof ranges from 15o to 23o, among which Jerez wine stands out. 4,000 wineries – mostly small and backed by primarily Spanish capital – produced 29 Mill. Hl in 2013.

Even though cider is produced all over Spain, because of the peculiarities of its terrain and its damp climate, Asturias (in the North of Spain), is the only region where apple trees prosper instead of vines. There are documents testifying that its farming dates back to the year 781 A.D. Cider manufacturing requires a combination of three types of apples: acidic (45%), sweet-acidic (25-30%) and bittersweet (10%). Asturias cider is regulated by a Protected Designation of Origin (D.O.P.) which uses only native apple varieties.

Its consumption is related to social and festive gatherings. The cider pourers, escanciadores, serve the cider by raising their arm above their head and pouring the cider into a glass far below so that it becomes oxygenized and froths. Very little is served and it is drunk in one sip. Natural cider is a fresh, acidic and slightly sparkling beverage.

Beer is one of Spain’s most popular drinks. In 2012 the average consumption of beer per capita was 47,5 l, one of the EU’s most moderate. Unlike the North of Europe, beer in Spain is fundamentally drunk with friends and family, always with food. 97% of Spaniards prefer beer with their tapas.

Spain produced 33 Mill. Hl of beer in 2012, positioning it as the 4th producer in the EU and the 10th worldwide. However we are the number 1 producer and consumer of alcohol free beer in the EU. The extraordinary growth of our exports (81% since 2009) is proof of our beer’s great quality. Of the over 100 countries to which we export, the main destinations are Equatorial Guinea, Portugal and Australia.

But not all Spanish beverages are alcoholic. The trend towards healthy and natural products has boosted mineral water consumption. Coming from rain and snow filtered by the earth, this kind of water contains numerous healthy minerals. In order to guarantee the original purity of bottled water, the sector is subject to the tightest quality and safety controls.

Spain is the 4th mineral water producer in the EU and the 3rd consumer (136 liters per capita). The sector consists of about 100 companies dotted around the entire country bottling over 5,000 Mill. liters, employing 5,000 people and grossing euros 900 Mill. a year. 96% of production is natural mineral waters, of which 96% is still and the remaining 4% is carbonated.